The phone rings.
The queen bee is full of royal jelly and ready for action.
The man tells the potential partner beautifully warm semi truths and she blushes and leans forward caressing her own chest.
The smiling male bonobo winks and strokes and tries to get the female’s attention.
The woman flips her hair over her shoulder and giggles on cue when the man flirts.
The frigate bird inflates his giant heart shaped balloon.
The dinner is delicious.
The red sided garter snakes releases her pheromone and the mating ball begins.
The man leans in for a kiss and the woman lifts her chin to meet his lips.
The female hyena erects her enlarged clitoris at will.
The woman has shaved her gentalia in anticipation.
The male manakin moonwalks for love.
The lighted candle glows in the darkened bedroom.
The man undresses the potential partner slowly kissing her tender skin.
The male giraffe induces the fleshmen sequence.
The woman succumbs, her body tilted upward and outward for her potential partner.
The female penguin lays down while the male penguin presses his cloaca onto hers.
Stars align.
The average time for male dolphin ejaculation is 12 seconds.
The man tells his partner this is the first time that this has ever happened and apologizes.
The adult male and female pandas show little interest in sex.
The woman rolls her eyes, sighs heavily and deletes the man’s number from her phone.
The female porcupine forces the male to mate until he is exhausted. If he can’t handle her loving, she will leave him for another male.
The phone rings. 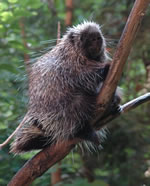